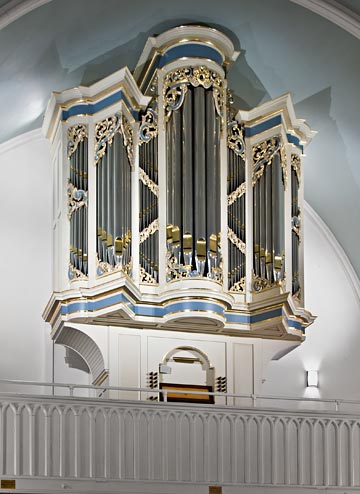 Historic Christ Church boasts one of our most elaborately designed organs. The church itself dates from 1742, with a charter granted from King George III in 1761. The steeple was built in 1773, from whose steps the 3rd reading of the Declaration of Independence occurred in 1776. Later, in 1784, a general meeting was held here to establish the American Episcopal Church. Since then there have been modifications and enlargements to the building proper until a lightning strike in 1995 made the previous organ unplayable. With the guidance of Director of Music, Mark Trautman, an organ contract was signed in 1997-98 and installation of the instrument occurred in late August of 2001. A few weeks later on 9/11, smoke from the collapse of the twin towers in NYC could be seen clearly from the steeple windows.

This organ packs a complete 2 manual organ with swell box into a small (16 foot a sharp) Dutch style polychromed and water-gilt case. The 8 foot Principal tc of the swell is incorporated into the entirely speaking façade, and presents a wonderful foil to the great Principal 8. Voiced with a late Dutch sound in mind, this gem surmounts the interesting acoustic of a barrel vault, and provides the basis for a very active sacred and concert schedule.