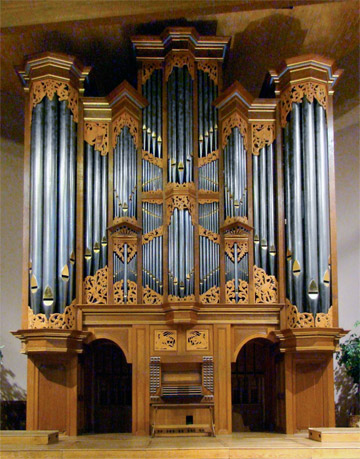 This large 4 manual organ resides in the church which also serves as the center of campus life at Southern Adventist University. It is officially called the Anton Heiller Memorial Organ, in honor of the 20th century Austrian organist and Bach scholar, who was also the teacher of University Organist and Professor of Music, Judy Glass. Though originally designed in 1981 and built as Magnum Opus 26 of John Brombaugh & Assoc., tonal finishing was completed by Bruce and Ralph after the official dedication in April, 1986. A few short years later, in 1990, the church and organ required major repairs when a tornado ripped off the sanctuary roof and flooded the organ.

This imposing organ exemplifies the 17th century North European style of organ building by such builders as Arp Schnitger and Hendrik Niehoff. It places the Hauptwerk high at the center of the organ, with the Recit (Swell, with a nod to the 19th century) behind it against the back wall, and the Positive below at main impost level. Directly above the organist is the 11 stop Brustwerk with the main pedal chests in the large tower on each side. Though the pipe scaling of this organ is relatively moderate, the 94mm wind pressure allows the organ to fill a very large room with only moderate acoustics.