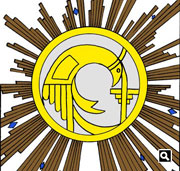 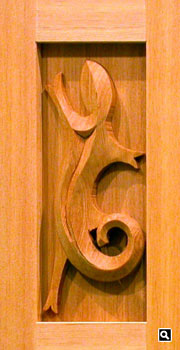 The carvings on the instrument are based on southwest Indian motifs realized in the classical European aesthetic of symmetry, motion, and proportion to harmonize the traditional structure of the pipe organ with the native surroundings. The main element in the design is the rain bird, chosen as the metaphor to symbolize rain in the desert. Based on Hopi precedents, it is recognizable within the carvings as an inward curved head and beak with two large stylized feathers pointing upward. These elements were then combined to create the bulk of the carving seen. Also, in keeping with the rain motif, there are two rain serpents in “san ildefonso” tradition at the top center of the organ on either side of the central star/sun. Almost forgotten, at the bottom of the four largest vertical posts, are geckos to symbolize the ground or earth.

Most prominent, however, are the four large gilded circles with an anthropomorphic cartouche in the center. According to ancient church tradition, the four authors of the Gospels were represented by symbols which depict the four aspects of the same Christ: Jesus as human in birth (the man) and as a sacrificial victim in death (the ox); strong and powerful in His resurrection (the Lion) and rising to the Father in his ascension (the Eagle). Looking counter-clockwise from the upper left corner, the man (Matthew), the ox (Luke), the lion (Mark), and the eagle are based on Indian concepts of design and form which are most often seen in their pottery.

In the rectangular ‘boxes’ below the groupings of smaller pipes are again found feathers from the rain bird. This time they are overlaid with one of the four Hebrew letters constituting the name of God, “Yahweh” or Jehovah: yud hey vahv hey, also known as the Tetragrammaton. These can be read starting in the upper right hand corner and reading in a counterclockwise direction. Thus, the rays of sun and God are both above all things while God himself is IN all things.